No damn character arcs: The story behind the missing Owl and Raccoon novella

In January 2015, I sent a breathless get-stoked message to my email list. "The third Owl and Raccoon novella is coming! A kindergartner disappears from a moving school bus! Here's the gripping opening chapter!"

Cut to July 2016. I finally published the third Owl and Raccoon novella. Except it was called Not With A Bang. And the missing kid was a teenager. And the bus was a city bus. And, yeah, obviously not the same book.

So what happened to the novella I'd titled Last Child Missing?

One of my goals when I sat down to write the very first Owl and Raccoon novella, The Single Staircase, was to avoid anything that looked like a character arc. Owl and Raccoon were adults uniquely suited, in different ways, to hunt for missing children. The decision they make in that book's final pages was based on decades of dedicated police work and frustrated personal lives. They weren't meant to evolve, they were meant to find Sophia Grey.

But after the second Owl and Raccoon novella, WDYG, I started to get a clear vision of where Owl and Raccoon were going in their lives. I knew them as humans. And I wanted to let them follow their different paths.

So when I wrote Last Child Missing, I ended it with a moment that would irrevocably alter the course of their lives. And here it is:

Raccoon executes a pedophile and Owl covers it up.

I came so close to publishing that book. But I couldn't do it. Because I hated my ending. It was like the serial killer from The Wire. Or the episode where you learned Buffy was hallucinating. Or that whole arc where Crockett got amnesia. It was a moment so stunning it eradicated the grinding, quiet, one-foot-in-front-of-the-other universe I had worked so hard to create.

So I sat on Last Child Missing. For sixteen months.

This was harder than it sounds. While Sin Walks Into the Desert is my most successful book, it's had tons of advertising, awards and reviews supporting it. Meanwhile, the Owl and Raccoon novellas just kept plowing forward, earning readers through giveaways, word-of-mouth, and the support of blogs like The Locked Room Mystery and The Invisible Event. I needed to keep the momentum going with a third installment, but I couldn't make myself publish Last Child Missing.

Unfortunately coming up with a third mystery was hard. Wait, that's inaccurate. I came up with dozens of great mysteries. It was coming up with one great solution that took forever.

But eventually, I figured it out. And I'm glad I waited. Not With A Bang moves Owl and Raccoon forward in a way that's true to the characters and the series as a whole. The title is an allusion not only to the book's end, but to the struggle I faced writing it. In the real world, there's no big catharsis and there's no dramatic closure. There's just people making the best decisions they can with flawed and incomplete information.

Or as Owl himself says, "We're all good men. Things just go sideways on us."

[Ed. - If you've never read any Owl and Raccoon books, I recently published The Single Staircase, WDYG and Not With A Bang in one collected box set entitled Owl And Raccoon: Locked. You can get it on Amazon now.]
Posted by 300 Spartans Gym at 11:46 AM

Labels: LOCKED ROOM MYSTERIES, MIAMI VICE, NOT WITH A BANG, OWL AND RACCOON, THE SINGLE STAIRCASE, THE WIRE, WDYG, WRITING 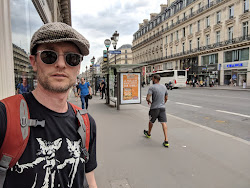 Where to find me online

You can talk with me on Twitter. And see my resume on LinkedIn. I share content on YouTube and Soundcloud. My writings on culture, music, advertising and politics are my own, and do not reflect the views of the clients who pay me to make wonderful stuff.